This week we made our first of two visa runs while we are here in Argentina. We were able to take a ferry across the bay to Uruguay for a day. While there, we were able to explore the city of Colonia Del Sacramento. We rented a golf cart to get around the city better and had a very enjoyable day. The city of Colonia was founded by the Portuguese in 1680, but later taken by Spain and eventually became part of Uruguay. A fort previously surrounded the city because of the many attacks it faced. Parts of the fort wall including the draw-bridge entrance can still be seen in many parts of the city as well a few canons still around too.
The country of Uruguay has a population of about 3.44 million most of which live in Montevideo, the capital and largest city of Uruguay (1,270,737). The next largest city is less than 100,000. The county has beautiful scenery and is a very enjoyable place to visit. The religious scene is very different from other Latin American countries. It is widely considered the most secular nation in the Americas. Nearly half the country claims no religion at all. This is partly because they are one of the wealthiest countries in South America. I do ask that you would be praying for Uruguay that they would be reached with the Gospel of Christ. 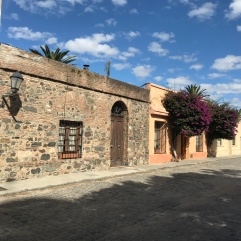